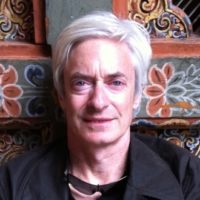 Laurence Brahm is a global activist, international mediator, pioneer social enterprise entrepreneur, political columnist, author, international mediator and a lawyer living in China . Brahm is also founder and CEO of Shambhala Studio, one of Asia’s first social enterprises. He is also the founder of Himalayan Consensus, a NGO, and the African Consensus Movement, both dedicated to protecting ethnic diversity through sustainable economics.

Laurence Brahm studied Intensive Mandarin Language in 1981 at Nankai University in Tianjin, China. In 1989, he received his Masters Degree in Law from the University of Hong Kong Faculty of Law. Determined to discover origins rooted behind the myth – Shangri-La, Laurence Brahm launched the “Searching for Shangri-la” Expeditions Project in 2002 hence the Shambhala Studio was born to document the journey.

In 2015, Laurence Brahm was elected Fellow International to the New York Explorer’s Club and in 2016, the Searching for Shangri-la Expeditions Project received the National Geographic Air and Water Conservation Award, and he became a recognized National Geographic explorer. He is listed on Wikipedia as one of 296 American Explorers.